J Snyder Therapeutic Services utilizes federally registered service dogs at our practice. All of our dogs were rescued as puppies and are highly socialized with both other dogs and people. Dogs are one of the only animals successfully domesticated and integrated into the lives of humans, and we cannot imagine how dull and disenchanting life would be without them. We would like to believe that our dogs are a testament to our stance that all organisms deserve a chance and that most are very capable of rehabilitation even when annexed from horrific circumstances. Having owned both purebred and mixed breed rescue dogs, it is as if these rescues possess some type of canine knowledge that they were spared. Below are the biographies and pictures of our dogs. Please refer to our patient/therapist agreement’s informed consent section for information specific to our service animals. 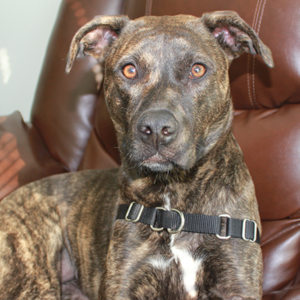 Shea- Shea is a 1 ¼ year old Mountain Cur mix weighing in at 60 pounds. She resembles some sort of Langur monkey and tends to take on postures similar to our apelike ancestors. Upon viewing Shea you might speculate that she is either infirmed or aged, and you would be incorrect on both counts. Shea is quite possibly the laziest hound ever conceived, opting to sleep in various beds meant for both dogs and people rather than to interact.  Please request Shea if you would like to tone down the tension of a really fast moving treatment.

Psychological Principles- Shea loves hard, plays hard, and rests hard. Given she spent much of her first two months in relative isolation, separated from her mother, and was then surrendered by her first family, she possesses somewhat of an anxious/avoidant attachment style. We have worked hard to not only integrate her into the pack but also to respect her desire to self soothe in isolation. Additionally, Shea vacillates between either attempting to smother others with affection or not associating with them in any capacity. Mindfully attuning to Shea’s disposition and mood states have enabled us to respect her early experiences without forcing our agenda onto her, to both her and our betterment. 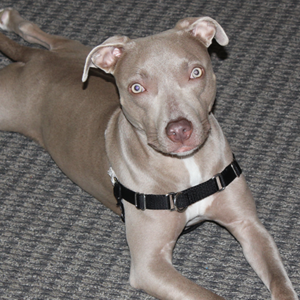 Gracie- Gracie is a 1 year old, pocket pitbull mix, weighing in at 35 lbs. It is hard to discern whether or not she shares DNA with the hippopotamus, the pig, or some type of monitor lizard. She looks as though she offers seminars intent on teaching the proper mechanics and form of hack squats and deltoid raises in various gyms across Montgomery County, however quickly you will see that she is one of the friendliest, loyal dogs you will ever come across. She is extremely bright, trainable, and ready to serve. If you hear one or two barks upon entry do not be alarmed, as we consider this more of a startle-response driven greeting than anything else.

Psychological Principles- Gracie’s mother was abandoned while pregnant and was unable to nurse her pups, resulting in Gracie’s need to be weaned by bottle via her human caretakers. Upon adoption Gracie was nearly catatonic before arriving in our yard. Once she was allowed to walk the property with her sisters she literally came alive. However, since that time she has developed moderate separation anxiety after imprinting on her masters. We have attempted to manage this issue by incrementally increasing the time that she spends in different environments with different people in an effort to desensitize her to object absence (Some battles are harder to win than others). 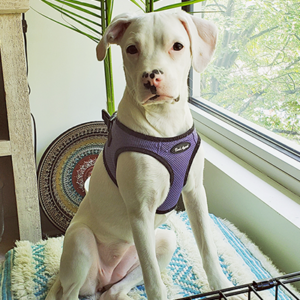 Molly is a 6 month old miniature boxer/pitbull mix that has rounded out our pack. She has a malocclusion of her jaw which can at times be mistaken for a smug grin, and was integrated into the pack within 48 hours with minimal regression displayed by her sisters. She has earned the name Mogwai for generating sounds similar to Gizmo from Gremlins, but her markings resemble those of a baby calf.

Psychological Principles– Molly is a mischievous puppy known to thieve socks, shirts, and other undergarments from any bedroom or bathroom she passes. In response to playing with objects she is disallowed (undesirable behavior), punishments in the form of issuing a verbal reprimand while concurrently providing her with a substitutive object (desirable behavior), she has been reducing the frequency of her thefts while obtaining reinforcement for her tendency to more selectively choose appropriate objects as toys. Aspects of Molly’s behavior can also be understood by elucidating tenets of Social Learning Theory. Even though Molly has seen her sisters receive punishment for similar crimes, she does not always respond to her own punishments. Her attentiveness towards her sisters, retention of their naughty behaviors, and ability to reproduce their behaviors contribute to her imitation of them. Either the hardwiring which has her imitating the species-specific behavior of her sisters is innately strong, or the mediating influence of her rewards and punishments are not sufficient to sustain the desirable behavior.